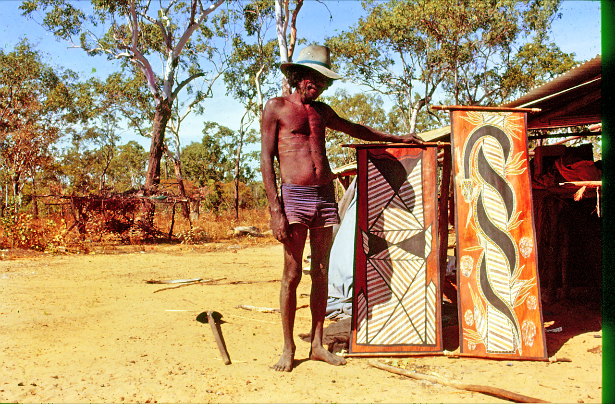 Dalabon is spoken in central Arnhem Land by a dwindling population, now reduced to fewer than half a dozen fluent speakers, although there are many people of middle age or young adults who understand the language to varying extents. It belongs to the Gunwinyguan language family.

The traditional territory of Dalabon-speaking clans centred on and to the west of the upper reaches of the Wilton River, along the eastern and southern edges of the Arnhem Land escarpment. Although many Dalabon people still live on their country today, in communities such as Kolobidahdah, Yayminji, Weemol, Korbbolyu and Bulman, others live in communities on the territory of adjoining language groups, such as Barunga, Beswick (Wugularr), Manyallaluk (Eva Valley), Kunbarllanjnja (Oenpelli), Jabiru and Maningrida.

Many fluent Dalabon speakers spend or have spent periods of time in and around Katherine, where Mayali has tended to be the most-widely known and spoken Aboriginal language. The dispersion of Dalabon speakers has reduced the opportunity for younger members of the community to hear and participate in regular conversations in their ancestral language. Although many younger people speak some Dalabon, and are interested in learning more, it is giving way, as the main vehicle of everyday communication, to Kriol and English in the south, and Kunwinjku / Kuney and English in the north. We hope that by putting up these Dalabon stories online, recorded from a number of different Dalabon speakers in different locations, we will assist young Dalabon speakers and others who are interested in hearing their ancestral language, wherever they live. Permission to put these recordings online has in each case been obtained from the person or people who we have been told holds the most authority to authorise them to be put online and in most cases the elders we asked, and their families, were enthusiastic about the chance this gives to pass on their knowledge and voices. Anyone who has concerns about any recording posted here should contact us at Wolfgang.Barth@anu.edu.au so we can renegotiate the conditions or limit access.

Dalabon is also known as Dangbon, Ngalkbon or Buwan. The term Dangbon tends to be used by speakers of Kune or Mayali, Ngalkbon by speakers of Jawoyn, and Buwan by speakers of Rembarrnga. But the terms are also used by Dalabon speakers themselves on the basis of which other language group they most regularly have dealings with. There are a few differences between ‘Top End’ or northern Dalabon and ‘bottom end’ or southern Dalabon, which will sometimes be characterised in terms of the difference between Dangbon and Ngalkbon. There are also said to be differences depending on the moiety affiliation of clans speaking the same language, with Duwa clans speaking Dalabon-djurrkdjurrk (‘quick way Dalabon’), and Yirridjdja clans speaking Dalabon-muduk (‘slow way Dalabon’), but no different words correlating with this difference have yet been found, so it more likely reflects an overall prosodic style of speaking, rather than the more formalized differences found in the Yolngu languages to the east.

Each of the four language names can be broken down into the word bon ‘go’ plus, in three cases, the word for ‘mouth’ in the language using the name: in other words, “people in whose mouth (language) one says bon for ‘go’”. In Dalabon, dalû- means ‘mouth’ (occasionally you hear the name pronounced Dalûbon as an alternative to Dalabon). Dangbon and Ngalkbon are parallel formations based on the root for ‘mouth’ in Mayali or Kuney (which is kun-dang or dang-no) and Jawoyn, where the word for ‘mouth’ is ngan-ngalk (kun- and ngan- are noun class prefixes). Buwan, used on the Rembarrnga side, is the Rembarrnga pronunciation of bon: lots of words in Rembarrnga have changed o to uwa: kom, which is the root for ‘neck’ in Dalabon and Mayali, is kuwam in Rembarrnga.

Dalabon is bordered by the following languages:

• to its north and northwest by Mayali, Kuney and Kunwinjku (all closely related dialects sometimes now known collectively as Bininj Gun-wok)

• to its north-east and east by Rembarrnga,

• to its south-east by Ngalakgan

• to its east by Jawoyn

Alice Boehm tells the story of her life. Recorded by Nick Evans in Maningrida, July 1993. 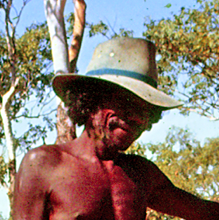 This recording was made during a fieldtrip to Yayminji and surrounding areas in 1995 with Nick Evans, George Chaloupka, Pina Giuliani and Murray Garde, to record rock art, knowledge of traditional plants, and Dalabon and Kune language

Recorded by Maïa Ponsonnet on 18th May 2011, near Dordluk creek, just before Beswick on the highway, with Lily Bennett and Nikibini Daluk, working on Dalabon. Lily Bennett tells a 'funny story' that took place close to Manyallaluk, probably around 1980. Final transcript and translation by Maïa Ponsonnet, December 2016. Some slight retranscriptions added to this file by Nick Evans, March 2017

Maggie Tukumba is telling the story of Korlomomo and Berrerdberrerd, the crocodile and the rainbow bee eater.

This story was recorded from the late Jack Chadum at Weemol Springs in the Northern Territory in June 1992 by Nick Evans and Murray Garde. Several other Dalabon speakers were also present, including Don Buninjawa, Maggie Tukumba (Chikappa) and Flora (surname unknown). A masterpiece of dramatic, humorous story-telling, it recounts the meeting between a character called Naworneng, who is on his way back from a successful hunting trip, and a “Mimih” spirit – Mimihs are slender spirits that d... 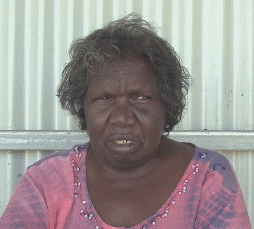 Queenie Bangarn Brennan is telling the traditionnal story of the Whistleduck, Ghostbat and Rainbow. This story was recorded by Maïa Ponsonnet on 5th of May 2011 at Barunga. A Kriol version told by Queenie on the same day can be accessed via the ELAR archive.

This story was told to Nick Evans and Murray Garde at Weemol Spring in 1992 by Jackie Chadum and Don Buninjawa, with some prompting and further commentary by Maggie Tukumba. It has been transcribed by myself, Murray Garde, and Sarah Cutfield, with assistance at various points from Maggie Tukumba, Alice Ngalkandjara, Peter Mandeberru and Dudley Lawrence at transcription sessions in 1992 (Maningrida), 1995 (Bulman) and 2017 (Weemol). It is a complex performance, partly in medley style and partly ...

The Dalabon corpus in the ANNIS corpus viewer consists of 62,720 words.

The late David Karlbuma (also spelled Kalbuma) was an artist belonging to the Barabba clan and the Kamarrang subsection. His father was the famous artist Wally Mandarrk. David grew up in the region around Yayminji, sleeping in rock shelters with his father and family, gazing up at rock paintings, some painted way back in time, others by his father. Later he lived at the Korlobidahdah outstation near Maningrida. He spoke the Kune and Dangbon (Dalabon) languages, as well as English.

Manuel Pamkal, Kodjok (Godjok) skin), was born in 1963 at Birba (King River), in Central Western Arnhem Land north of Barunga. Growing up in the bush gave him a deep knowledge of traditional Dalabon language, culture, art and song. He works as an artist and senior tour guide at Top Didj, Katherine, painting barks himself and teaching the skills of painting rarrk to others, and is deeply committed to ensuring the survival of the Dalabon language by teaching the language and its stories to the next generation. For more details see the topdidj website

Queenie Bangarn Brennan (born 1951) is a language teacher, language activist and story teller currently living between Barunga, Katherine and Djirrbiyuk near Jabiru. She speaks Mayali as her mother language, Dalabon as her father language, as well as Kriol and English. She has been involved in the documentation of these languages for decades, first as part of the Kriol-English bilingual program in Barunga in the 1980s, later via the Katherine language Centre and collaborations with individual linguists, on Dalabon in particular. She has also co-authored a number of story books in Dalabon and Kriol.

The late Maggie Tukumba (original surname Chikappa, skin name Ngarridjdjan) had a vast knowledge of the Dalabon language and over many years contributed an enormous amount to its documentation and recording, through her work on the First Dictionary of Dalabon (1) and the Dalabon plants and animals (2), as well as numerous recordings of traditional stories and other material about Dalabon traditions. She was untiring in her efforts to teach her language to the younger generations, including the many younger children who she cared for for longer or shorter periods. She chose the following words for the preface to the Dalabon dictionary, which sum up her commitment to sharing her knowledge with everyone, whatever their colour or culture: nunh kenbo, kardu marruh-kuno nga-yawoh-yungiyan beba-kah, nunh kahlng-barrakarrminj, warlahmikun bulah-bengkan nunda yang, ba yibungkanh kaye-dja-yu nunh kanh karru-no ‘from now on, whenever I bring out another story or word I’ll put it in the book, so that it can spread everywhere and everyone can use it, and people everywhere can hear and know the language, its real significance’ Then she continued: Kenbo yilah-dulu- burlhkeyhwoyan, mak kaduluwanjingh, bah kadjahlng-ngongno kanh duluno, kanh drebuy njelng yilaye-yenjdjung: Then we’ll bring out the meaning of things, not just one idea, but all sorts of meanings, including the true subtleties of what we say.

Lily Bennett (Bangarn, 1951-2014) was born in the bush, then attended school at Barunga and studied at the Batchelor Institute of Indigenous Tertiary Education. She lived in Weemol from the end of the 1970s until the early 2000s, when she moved back to Beswick. She was a teaching assistant at the Barunga Bilingual School in the 1980s and was later involved in language documentations of Dalabon as well as Kriol. Lily was passionate about language but also about health, reflecting her professional experience as a Health Assistant in remote clinics.